Archived version of the site for 2012! We recommend visiting the following official websites: www.TibetanParliament.org | www.Freiheit.org | www.Tibet.net 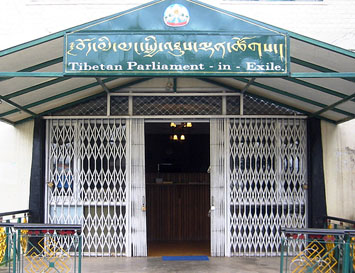 The Tibetan Parliament-in-exile is located in the hill town of Dharamsala, in the Dhauladhar range of the Himalayas in northern India. The Tibetan plateau is not far from there, but the towering Himalayas that lie between remind the community-in-exile of the formidable obstacles barring their return to their homeland. The very name, Dharamsala, which in Hindi means a resting place for travellers, is a poignant reminder that no matter how long they stay here, their home is elsewhere.

In February 1960, at Bodh Gaya (where Lord Buddha achieved enlightenment), His Holiness the Dalai Lama outlined a detailed programme designed to introduce the exiles to the practice of democratic self-rule to the large group of Tibetans gathered there. He advised them to set up an elected body with three exile representatives for each of the three cholkas and one each for the four Buddhist religious traditions.

Elections were duly held and the first elected representative body in Tibet's history â€“ the Commission of Tibetan People's Deputies (CTPD) â€“ took oath on September 2, 1960. The Tibetan community observes this historic date as Democracy Day, and public functions are held in all the Tibetan settlements.

The process of self-government was accelerated in 1990 when the Assembly was expanded and given independent authority. The Assembly was empowered to elect the Kalons (Minister) who would form the Kashag (cabinet). Until then the appointment of Kalons was the exclusive prerogative of the Dalai Lama in accordance to the wishes of the Tibetan people.

This change of a fundamental nature gave substance to the proceedings of the Assembly where Kalons are now required to defend and explain the activities and functioning of the executive to a critical Assembly. The change has had other far-reaching effects; Deputies now discuss and lay down policies on issues, which formerly were the preserve of the Dalai Lama and his advisers. They keep a close watch on foreign relations and on the activities of Tibetans inside Tibet and abroad. Further reforms were introduced in 2001, when for example, the entire Tibetan Diaspora was empowered to directly elect the Kalon Tripa (Chief of the Cabinet).

The Assembly of Tibetan People's Deputies' building was completed in the early 1980s during the seventh ATPD. It is a modest structure at the centre of a horseshoe-shaped cluster of buildings housing the various departments of the Secretariat of the Government-in-exile. 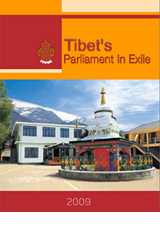